Can astrologers see the Earthquake and Atomic catastrophes in Japan’s natal chart?

Below is synastry for the earthquake in Japan on 11th March (inner chart), with the outer chart for Japan 1889 as described in Nick Campion’s book on mundane charts.

Immediately we can see the ruler of the all important ascendant of Japan’s chart is Mercury, and it is cuspal as it moves from Aquarius to Pisces, not a good placement for the ascendant Lord. Also just above the asc we can see two outer planets Neptune and Pluto are stationary, a very powerful position for a planet.
Mercury is in full aspect of Jupiter also cuspal at O deg Capricorn and ruler of seventh, while Mercury is moving towards the volatile planet Mars, also in Pisces, so Mars is disposited by a weak and cuspal Jupiter, and co ruled by the stationary planet Neptune in twelfth house, and Neptune is also cuspal. Unhappily Saturn is retrograding towards an exact aspect with the natal ascendant, so not a happy omen for the people of this country. The fourth cusp is aspected by Uranus, ruler of tenth, while fourth ruler Sun is in tenth house, in Aquarius, ruled by Uranus showing a strong connection between the landscape and planet of sudden change, eruptions and also volatility.

The following is a presentation of astrological patterns for two major Japanese disasters and how they link to this chart in mundane astrology. 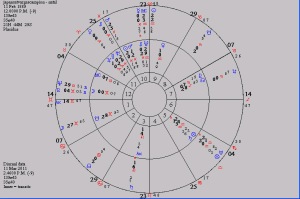 The rules of astrology expect a significant tie in with transitting planets and the natal chart for the time of a significant event.

Earthquakes also have rules to guide astrologers for that specific event, as do rules of weather forecasting generally.

In weather forecasting we expect the angles to play a part in being triggered at an event, or for the rulers of the angles to also play their part too.

The natal chart for Japan has Gemini asc and this is triggered by the transitting ascendant at the time of the earthquake. Not only that, in line with eclipse rules for earthquakes, the natal asc is also triggered by the eclipse point of the solar eclipse in January at 13 degrees Capricorn which is what we would expect from an active eclipse point.

All ancient astrologers even Raphael last century told us that we have to watch the eclipse and the countries rule by that sign the eclipse is placed in and watch for the results. A pretty demanding task as it means having the charts of every country in the world to hand, and often that isn’t possible.

The ruler of the asc, Mercury, representing the nation, is transitting 02 deg Aries and is triggering natal Pluto ( a sub atomic significator ) as well as triggering natal Jupiter in the tense square aspect. Transit Neptune triggers natal Neptune in twelfth, in an area even Ptolemy says is a very sensitive part of the chart as Neptune, like Pluto, is ascending.

Mercury, ruler of the ascendant also moved from southern to northern declination at the time of this event perhaps adding to volatility.

In my experience of working with mundane charts the ascendant degree or the ascendant ruler degree is activated by transits at the time of a big event. Ruler of Japan’s asc is Mercury at a cuspal 0 deg Pisces retro, and is triggered by transit moon at 0 deg Gemini at this event. The natal ascendant itself is being triggered by the transitting ascendant at 14 degrees Leo, while transit Mercury semi sextiles its own natal position, not to mention only just moving away from transit Uranus, it’s dispositor natally, and the planet of sudden revolutionary change. Transitting Saturn is retro-ing backwards towards forming a more perfect aspect with the ascendant as well, providing hard work and unhappiness for the nation, and in fifth house it is about to remind them all about a similar travesty brought about by a previous sub atomic event. Fifth house is leisure and this is about to be a thing of the past as lifestyles are about to be catastrophically transformed, fifth is also house of the past experience. Transit Mars is moving towards a perfect aspect with the ascendant from 12 deg 48 Pisces, and as it rules sixth house of injury, it is about to threaten the health and welfare of the people of Japan, as well as the landscape as it also approaches the ruler of fourth house Sun.

Lord fourth house is disposited by Uranus natally, and Uranus is Lord tenth and in transit is in exact aspect to natal Neptune, as is with transitting Neptune, ruler of the sea and tsunami. Sea and sub atomic action connect celestially with Neptune and Pluto being so close together natally, and terrestrially, in the two mega catastrophic events foucussed upon in this feature, that the country gets devastated by.

I also expect the nearest lunar phase chart to be active at the time of an event in a city or country and we can see that the Moon on 11th March quarter moon chart is in Gemini approaching the natal first house putting the people of Japan in the spotlight and in the media.

I always expect there to be at least three planets in the same degree at the time of any event that is transforming and at the time of the earthquake transit Uranus, Neptune, and the nodes…never ignore the nodes…are in the 29 degree phase of their sojourn.

Not only that see the transitting nodes, significator of upheaval (see them play a part in the chart of many refugees) are triggering the natal Moon in 27 degrees Gemini, and of course the first house, many of the Japanese people became refugees in their own land after their homes were devastated by the earthquake and tusnami. All Gemini ascendants this year will have a similar time of upheaval in their life, though will not necessarily become refugees etc.

The lunar eclipse of December 2010 is also activated in this chart. The degree of the December eclipse is 29 deg Capricorn and it is triggered by transit Neptune and Uranus and the transit nodes, all of them activating natal Neptune in the sensitive zone above the horizon of the natal Japanese chart. ( read Ptolemy to understand this point) It was this particular scheme of planetary combinations that made me aware an extremely seismic time was about to arrive from 12th-22nd March as published on my website November 2010….www.starsite.org.uk

Japan and the day the atom bomb dropped on Hiroshima

I’m now going to apply the RULES as above; to the time the atom bomb was dropped on Hiroshima.
Below is synastry for Japan’s natal chart outer and inner chart is exact time of dropping of atom bomb but with Tokyo co ordinates. Compare these co ordinates with the Hiroshima ones in the chart following this one.

The angles play a more significant role when the chart is done for the correct coordinates of the event so see the chart following this one where the mc is transitted by Uranus at the exact time the bomb was dropped on Hiroshima….someone at the Pentagon chose that time astrologically methinks!

In Japan’s chart the asc is hemmed in between two malefics Uranus and transitting Mars straddling either side. Transit Sun also triggers the asc degree while transitting asc is also triggering the fourth and tenth house angles. Transit Venus is still cuspal at 1 deg cancer and triggers ruler of first house Mercury at 0 degree Pisces….

Natal Neptune’s (Neptune being a major player due to natal position see Ptolemy) dispositor Venus is triggered by transit Pluto which natally conjoins Neptune in the sensitive part of the asc. Transit Mercury, ruler of asc is in exact degree in fourth house as natal Pluto in ascendant. Transit Neptune is also four degrees triggering natal Pluto.

The three times same degree rule applies:- Mercury Neptune are 4 degrees but again we look to the transitting nodes the same degree ( 8.55mins is acceptable orb in relation to 9 degrees) as transit Mars and transit Pluto and we fulfil the rule of seeing three planets in the same degree at the time of an event. Not only that, these three planets are triggering natal Venus at 9 degreees, and Venus disposits natal Neptune in the oh so sensitive point ascending.

So what about eclipse involvement with this event? In June the eclipse point was 3.40 Capricorn triggering the natal position of Pluto…. (Very destructive? especially as Saturn opposed the eclipse in it’s own sign) while in July Saturn conjoined the solar eclipse at 16 degrees Cancer.
Did the preceding or nearest lunar phase chart single out any of the angles in Japan’s chart? A new moon in ruler of fourth sign Leo at 15 degrees was conjoined with natal Saturn only 7 degrees away from the fourth cusp but still acceptable as an influence over the land at Hiroshima. However, take a look at the following chart for a more mind blowing revelation 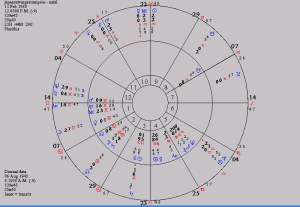 See the same event of the atom bomb dropping on Hiroshima, but with the coordinates set for that city in the following chart. The vertical meridian is at the significant 16 degrees the same degree of natal Saturn which sits upon it waiting for the malevolence to strike, while the solar eclipse strikes the same degree while semi sextile at 16 degrees Cancer. See Pluto is even nearer to the asc for Hiroshima, nearer than that of the asc for Tokyo Japan. See also transitting Uranus, and transitting mc, and transit asc, triggering the fateful ic where natal Saturn sits in perfect conjunction with the powerful fourth house cusp.

I find it hard to believe that Saturn alone on fourth cusp can bring devastation, especially as it is ruler of ninth, the best house of good fortune in the chart. This wasn’t a fortunate event but it perhaps is a karmic one, and Saturn is the great teacher and karmic regulator. Saturn also rules the unfortunate eighth house, therefore has the capacity to wreak havoc and destruction upon the country, its landscape, (fourth house) and it’s people (first house) as this atom bomb did. Saturn also disposits natal Jupiter in perfect conjunction with the cuspal O degrees Capricorn eighth house, so any good fortune this planet may have brought the people of Hiroshima is ruined by the poor placement of this totally debilitated planet

The material above is copyright and any use of it should be courteously referenced with the address of this blog beside it or my website address http://www.starsite.org.uk

http://www.starsite.org.uk home of ‘astrology doesn’t cost the earth’ (science does especially when it produces atom bombs)

notes: The earthquake in Japan created a massive tsunami that cause havoc along the western shores of North Japan island, crushing homes and vehicles under it’s strength. Thousands of people died due to too little warning before the highs waves struck. The earthquake was the fifth largest ever recorded and also set off nuclear warnings as the many atomic reactors dotted around the region began to break down and leak, polluting the sea and land and sending nuclear waves across the globe.

The atom bomb was deliberately dropped on Hiroshima by the US military, after a Japanese strike on a US harbour, and 3 days later another atom bomb was dropped on Nagasaki damaging the lives of innocent men, women and children, some of whom were still alive at the second time of devastation of this destructive act of nature